A Blue-Haired Girl with a Lime Green Goal 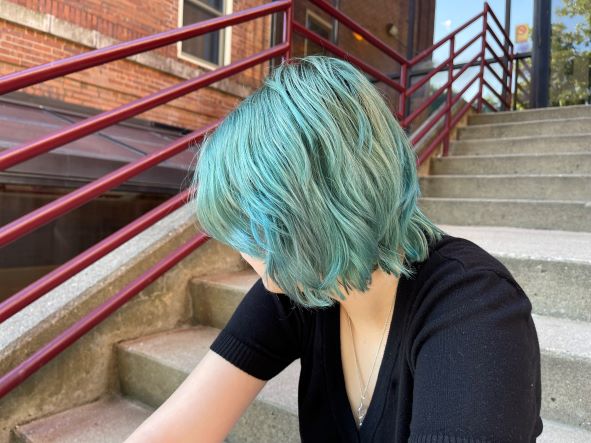 In Annabelle’s dream future, she’s driving a lime green Jeep with the roof off to her job working with animals. What isn’t clear in the dream is her hair color. Currently blue, it’s been blond, red, green, brown – everything but black, which she says is too hard to get out. “I haven’t seen my natural dirty blond in eight years,” she says.

Annabelle lives with her mom, younger sister and brother at Coburn Place. She’s sweet and funny, with an eye for fashion and a gift for sarcasm. She says jokingly she has no life, but the smiling photos of her at summer camp bowling, skating, making a Build-a-Bear, and playing tennis say otherwise. A summer session at her new school is also on her schedule.

“I’m in the best high school in Indianapolis,” she says. “I’m excited – mine was a lucky draw.” Annabelle has struggled a bit in school because of a learning disability, but she’s looking forward to a fresh start. “I want to get my grades up again,” she says. “I’m hoping to get into drama.”

“Annabelle is a bright young lady with tons of potential,” says Coburn Place Children’s Services Coordinator Teia Sherrell. “She participates in our School on Wheels tutoring program and is working to reach her education goals.”

Annabelle and her family were happy to get to Coburn Place. “It just took a lot of adjusting,” she says. “It took a while to feel like home.” But now it does. “I think it’s helping us a lot,” she says.

Before coming to Coburn Place, they lived with her mom’s abuser, who is a drug addict, and his also-abusive mother. Annabelle was a frequent target of his mother. “It was bad for my mental health, like really bad,” she says. “She always made rude comments about me, and we got into arguments 24/7. Once she told me to go sleep in the snow.” Living with a drug addict meant getting more than one bike stolen from her so he could buy drugs. “He wouldn’t really be there, and if he was, he was on stuff and it wasn’t good.”

Annabelle is working on her mental health. She knows she has trust issues. What helps the most is what is the hardest – opening up to people. “I have a lot of trauma, and it sometimes affects me,” she says. “Like if someone starts yelling at me, I immediately start crying. There are a lot of things that trigger it.”

She wants other kids in her situation to talk about it like she’s doing. “You have to open up to people sometimes,” she says. “I’m still working on that. I don’t like talking to people about all my stuff because it just brings back memories. There are people who are there to help you get through the trauma, but it takes me a while to open up to a therapist. It will take a lot of time.”

Annabelle has found it hard to make friends in the past. “People can talk to me, but they’ll have to approach me,” she says. “I have people on Snapchat, but I don’t have hang-out people.”

One of the people who is always there for her is her mom. “If I’m having a panic attack, I go to mom,” Annabelle says. “I can tell her anything. That’s my best friend. Sometimes I worry about her. I don’t know what’s going on in her head, what she’s thinking.”

Annabelle has a different father from the one her siblings share. His contact in her phone is his first name and a mad emoji. “My dad is trying to become a better dad,” she says. “He’s trying to reconnect, but I still have a grudge against him because I’ve seen a lot of things he’s done to my mom. It was just a lot of unhealthiness. But he’s trying.”

It’s a lot to carry for a teenager. Annabelle spends her time hanging out with her family, babysitting her siblings while her mom is working, playing on her phone and watching TV. Her favorite show is Criminal Minds. (She’s a Spencer Reed fan, of course.) She also says she is obsessed with The Vampire Diaries and Stranger Things.

Annabelle loves her siblings. She worries about her sister, who was affected by her dad being in and out of her life. She talks lovingly about her brother’s passion for Hot Wheels cars.

“It is a delight to observe her interaction with her younger siblings,” says Teia. “She displays a caring, patient and nurturing kindness toward her little brother. And she strives to be a role model for her little sister.”

Her mother has been happy with the girls’ summer camp experience. “They are loving it,” she says. “I think it’s so good for them to get out and around people here first before they start building new relationships in the real world. It helps rebuild their skills and friendships. Even Annabelle loves going and also likes the ‘sister time.’ That is something they never really had.”

Annabelle has a future plan mapped out that has her supporting herself while she pursues her dream job. “I want to go to cosmetology school and become a hairdresser, then work in a salon so I can make money,” she says. “But then I want to go to school for something with animals – as a vet tech or a groomer.”

When asked if she’s feeling optimistic, Annabelle says with a laugh, “What does that mean? I don’t know what that means.” But she does. Because she can picture herself in that Jeep.
__
To support the back-to-school needs of Annabelle and the other kids Coburn Place serves, visit their Virtual Lemonade Stand at www.coburnplace.org/lemons.