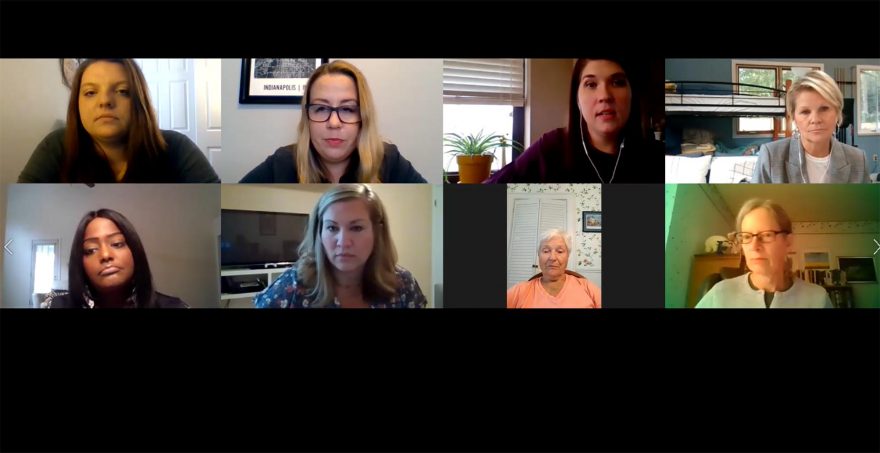 We had a virtual conversation about safety with Coburn Place’s Intake and Well-Being Services Coordinator Jacqueline Willett, MSW, along with Indiana Coalition Against Domestic Violence’s Associate Director Jessica Marcum and legal counsel Kerry Hyatt Bennett, JD. Here’s an excerpt. If you’d like to experience the event in its entirety, watch the video at the end.

How do you evaluate the lethality risk of a survivor that you are talking to?

Jacqueline: It’s important every safety plan is different for every single survivor. Period. Number one, we want to focus on physical safety. We ask them if they have a plan. They might. The most important thing is to always make sure there’s a plan. We tell them: Get your IDs, your children’s birth certificates and Social Security cards, bank account information, cash, any important documents. Collect them slowly to get ready for the time you can exit. It’s so important the lethality of the situation is addressed immediately. And today with technology, some survivors don’t realize that their social media platforms can put them in danger.

How does housing intersect with a survivor becoming safe?

Jessica: The short answer is in intersects in every possible way. Survivors have been telling advocates for decades that safety isn’t just the absence of violence, but also the presence of basic needs like housing, food security, education and health care. Housing is always first on that list. Emergency shelter is critical when the risk is high. Transitional housing is a way survivors can both address safety concerns and start to unpack the layers of trauma. Rental assistance and rapid rehousing programs work, too. Flexible funding is so important. Sometimes a survivor is just $1,200 away – first and last month’s rent – from starting a new life. Housing and safety go hand in hand.

What is the biggest obstacle that a survivor faces toward safety?

Kerry: It’s recognizing what that person needs as an individual and taking away the barriers. I think the legal system has an opportunity to level out that playing field. It’s one thing to get out of an abusive relationship, it’s another thing entirely to stay out of an abusive relationship. It has a lot to do with whether you can litigate and get child support, whether you can get possession of a residence, whether you can get an equitable distribution of property, if you are filing for divorce, whether you have legal representation at a protective order hearing so you aren’t bullied into a settling it or dismissing it. The legal system can be used as a tool to get those basic needs.

What do you feel like is the biggest obstacle to legal help?

Kerry: Access to legal services largely depends on your ability to access money, and if you are financially abused or you are controlled in a financial way – which so many people are – you don’t have access to those funds. And sometimes if you’re trying to apply for legal services, you may not qualify because maybe your abuser makes too much money. At ICADV, we match up people who need emergency legal assistance with lawyers who know what they’re doing. It’s one thing to have an attorney, it’s another to have an attorney who understands the dynamics of domestic and sexual violence and understands the impact it has on the children.

Is a survivor ever safe after leaving an abuser? Is there a window of time when a survivor is in the most danger?

Jacqueline: A survivor is in the most danger when fleeing. That’s why they always remind us when we’re working with a survivor to not say “just leave.” Because the risk of a survivor being harmed or killed is greater when they leave. Are they ever really safe? That’s a tricky question. I’ve worked with survivors a year in, and their abuser pops back up and reoffends. So I don’t know how to answer that question because in my heart, they always have to be mindful of their safety.

Can you talk us through the difference between a protection order and a no-contact order?

Kerry: There are a couple of different kinds of stay-away orders in the state of Indiana for personal safety. We have a civil protective order which is like any other civil action – Party v. Party. You’re asking the court to grant you personal safety. It’s just asking for the right to be left alone because the other person has shown they’re a credible threat. A criminal no-contact order is also a stay-away order, but it’s part of an existing criminal case. So if there’s a domestic battery charge – State of Indiana v Party – usually as part of that case, there will be a no-contact order.

How does someone prove that they’re being stalked?

Kerry: Stalking is a felony in Indiana. Under Indiana law, you have to prove that the intent is to put you in fear for your safety. Survivors need to capture the evidence of that repeated behavior.

Kerry: Studies say they do. No, they aren’t bulletproof. And as soon as you try to leave someone who has that narcissistic, controlling behavior, they are going to feel threatened. But if someone is influenced by the system – doesn’t want to be arrested, doesn’t want to be prosecuted – protective orders work.

Can you speak to the different challenges or barriers regarding safety that a survivor in a rural area might face versus in an urban setting and vice versa?

Jessica: In more rural communities, we see limited access to transportation – no busses, no cabs, no ride-share programs. I also think smaller communities, everyone is more interconnected. So someone will see your car if you stay with a friend, people know where you work, people where your kids go to school. In urban communities, the cost of living is so much higher. When you’re thinking of leaving a domestic violence situation, it could be hard to navigate in an urban community. There may be more services, but the demand is much higher.

What advice do you have for a survivor who is working to be safe but doesn’t feel comfortable or safe involving the police?

Jacqueline: If she doesn’t want the police, then a protective order is out. So the safety plan needs to be the bomb. It really depends on the individual story. We have to trust that survivors know what’s best for them.

What are the safety challenges of sharing custody with an abuser, especially with young kids?

Kerry: This is really hard because Indiana’s custody law very specifically says that a pattern of domestic or family violence must be considered when determining custody. And yet, very often you have courts that are saying they don’t care if the parents aren’t getting along, they are more concerned about the maternal and fraternal relationship. So much of this is educating the judge about why classic abusers with a narcissistic controlling personality do an incredible disservice to the children. I don’t believe if you’ve established a pattern of domestic or family violence that you can effectively and healthily share custody. You have to have special rules about exchanging parenting time in a safe way where there’s a third party, whether it’s at a fire station or a police station. Children in domestic violence relationships are tools of access and tools of control, and if the court doesn’t get in the way of that, then that kind of pattern of behavior will continue.

Jacqueline: Those are the most frustrating ones because of the danger.

Jessica: This is why customized safety planning is so critical because custody exchanges can be one of the most dangerous points in time.

What advice can you give people about how to help friends and family experiencing domestic violence get to safety?

Jacqueline: A lot of times people just don’t know about the resources that are out there. A lot of times survivors think there would be a cost. Just make them aware of them and let them know they have a support system.

Jess: The most common tactics used by people who cause harm are minimizing, denying, blame-shifting and isolation from a support system. One powerful tool to counterbalance those messages that is to be the opposite of that. Believe them. You want to support them in a way that makes sense for them. Gather the resources, but make sure you’re getting them to them safely. Make sure they feel supported know you’ll always be there no matter what. And it’s possible that you need to be part of their safety plan. Just be there to infuse the survivor with positive healthy messages.

Kerry: Sometimes you want to be the panacea – solve all the problems and be the savior and being responsible for making the person whole again. Back off. Stop talking and listen. Be supportive. Don’t be judgmental. Only do what they’re OK with you doing because you don’t want to put them at higher risk.