The Tangled Web of Human Trafficking and Domestic Violence 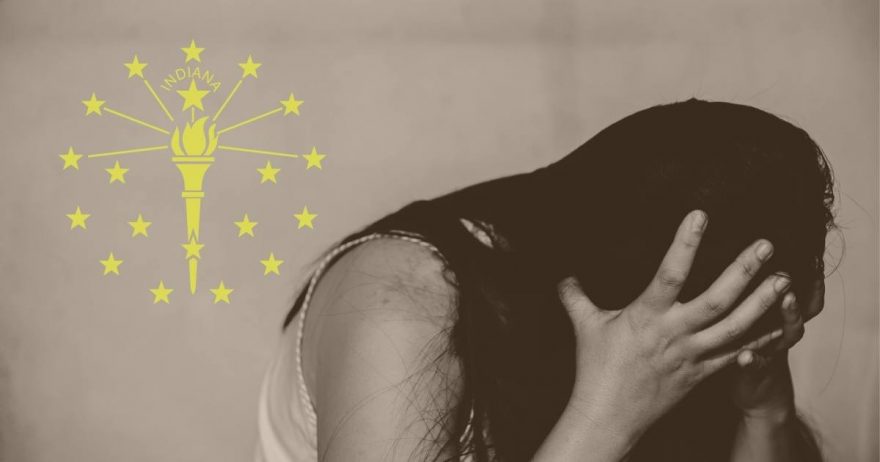 “We definitely don’t realize how present human trafficking is until we look,” says Lily Spencer, a housing advocate at Coburn Place.

According to a new Indiana State Report on Human Trafficking from the Office of the Attorney General and the Indiana Coalition to End Sexual Assault and Human Trafficking, human trafficking remains a pervasive problem in the state.

The National Human Trafficking Hotline reports identifying 63,380 human trafficking situations in the U.S. since 2007. In 2019, 157 Indiana human trafficking cases were reported to the hotline – a 19% increase from 2018. Of the 157 cases reported in 2019 in Indiana, 40 of those involved minors, according to the report.

Human trafficking: The use or threat of force, fraud or coercion to compel an individual to engage in commercial sex, marriage, labor or services.

Kate Kimmer has been doing anti-trafficking work for more than 12 years and has been ICESAHT’s director of anti-trafficking initiatives for three years. The organization, which is five years old, officially added HT to its name two years ago. She coordinates the Indiana Protection for Abused and Trafficked Humans (IPATH) Taskforce and co-authored the report.

“We do legislative advocacy, so I do work at the Statehouse on both sides of the aisle,” says Kate. “We’re lucky in the state of Indiana that both Republicans and Democrats believe human trafficking is a bipartisan issue. They work willingly with me, with survivors, service providers and law enforcement.”

In addition to legislative work, Kate also provides training and technical assistance to rape crisis centers, sexual assault response teams and all 150 taskforce members, plus whatever else she can slip in. “If someone needs connections or resources and is doing a prosecution or investigation, providing direct victim services or looking for prevention education, I’m who they call.”

Kate has a commitment to keep her work and the work of the taskforce survivor centered. “I’m very connected to and very protective of this community,” she says. “They are tough to serve, but they are the most resilient, creative, resourceful humans on the planet, or they literally wouldn’t be alive. We need to learn from them.”

There are a lot of similarities between domestic violence and sex trafficking survivors. Lily says, “One big difference I’ve noticed with survivors I’ve worked with is the number of people involved or complicit in their abuse,” she says. “Obviously, abusers can have wide networks, but human trafficking can have an even broader reach. It takes a lot of work to build trust.”

Kate agrees. “The biggest difference is multiple perpetrators,” she says. “And these perpetrators hold all types of positions in society. They could be law enforcement, judges, pastors, doctors, teachers. It impacts survivors’ ability to exit, their ability to find and sustain safety and their ability to move forward with life. Survivors of sex trafficking have a lot of trust issues with the square world in general. They think we’re all fake. To be fair, doesn’t it sound crazy that all of us just don’t know what’s going on – that we don’t know the guy sitting in the pew next to us is buying a 16-year-old every weekend for sex? They think there’s no way we don’t know, so to them, it feels like we are all in on it, that we’re all complicit. They think our world isn’t real – that it’s not authentic or genuine. It makes building trust complicated.”

In general, it’s more dangerous to leave a pimp than an abuser, and the survivor is more entrenched with a trafficker. “In my experience, human trafficking survivors have typically been involved a long time before they receive services,” says Lily. “Over the years, I’ve worked with a few who were ‘sold’ by their parents or guardians as children and still had the same trafficker when I worked with them.”

According to Kate, for us to have meaningful conversations with trafficking survivors, we must provide nonjudgmental space for them to present their authentic selves. “They have a whole culture, and it has rules, regulations, hierarchies, language, belief systems, value systems and here’s the thing, it’s not all bad,” she says. “Ambition, loyalty, prioritizing chosen family: Let’s talk about how we can take those values and translate them to healthy spaces. And that is received very differently from, ‘Just leave.’”

IPATH Taskforce members are working on helping trafficking victims vacate charges for crimes they were coerced or forced to commit while being trafficked – as long as those crimes didn’t cause bodily harm. “It’s complex,” Kate says. “Trafficked people tend to be from marginalized and oppressed groups, so if we aren’t being truly intersectional in this work, it’s easy to cause harm.” She’s talking about, for example, the unintended consequences of decriminalizing juvenile prostitution across the nation. “We saw white girls go into services and Black girls getting tried as adults for human trafficking. We must think about the racial and gendered implications of the policies we pass. No one who was supporting that policy wanted to see Black girls get harmed, absolutely not, but no one considered what the gendered and racialized outcomes would be in a criminal justice system like ours.”

The taskforce offers a curriculum for high schoolers and middle schoolers called What Would I Do? to get them to think through situations they are likely to find themselves in. They talk about internet safety, red flags in relationships, and gender and racial stereotypes.

The truth is no one is snatching children from the mall, but Indiana has a lot of at-risk people. “Think of the thousands of kids we have in the foster care system, in group homes, in residential facilities and juvenile detention centers who have nowhere to go afterward,” Kate says. “Those are children whose basic needs aren’t being met. Then think about how many more kids we add on when we consider those who need love and belonging, and those who are being sexually abused at home who want a safe place to be and somebody to protect them. Suddenly, we’re adding thousands and thousands of very vulnerable people across the state, and we’re just talking about the kids.” Pimps prey on women leaving jail and at bus stations because they know they don’t have money, clothes or a place to stay, or maybe they don’t have a way to provide for their addiction.”

“The whole power a pimp holds is that the people they are pimping believe they cannot walk away and if they did, no one would believe them, no one would have answers for them, and they would be the ones who would be blamed and shamed,” says Kate. “Forget the physical force, forget the threats to family, as long as the victim believes that mantra, they won’t walk out the door.”

When they do walk out the door, sometimes the first thing they need is housing, because it’s common they live with their trafficker. The IPATH report’s action plan included using Coburn Place “as a model to create a residential facility where trafficked adults can receive the specialized trauma-informed care, victim advocacy, and case management they deserve and need including vocational, educational, and life skills training, housing support, therapy, and community connections.”

“We want to prevent this crime, but we recognize that can’t just be education and awareness,” says Kate. “The reality is traffickers are filling voids our communities aren’t filling for vulnerable people. We have to go further.”

“The 2020 Indiana State Report on Human Trafficking shows good progress made by hundreds of partners across the state in addressing human trafficking,” says ICESAHT CEO – and Coburn Place founder – Tracey Horth Krueger. “The priority now is to continue the momentum. We must ensure that survivors have access to services while we increase our knowledge about the root causes of trafficking so we can end it.”

Kate is hopeful. “Even just three years ago, there were zero specialized human trafficking service providers for adults in the state. Now, there is at least one advocate at every single rape crisis center who has 15 hours of additional training just for this population and a direct line to us.” She also touts the work of Grit into Grace, Families First, Tru Harbor, Allies Inc., and Indiana Legal Services. “I’m proud of what we’ve built. The folks on the taskforce are putting in the work. We’re having tough conversations, and we’re pushing the needle. I think it’s exciting.”

“Is there a lot of work to be done? Yes,” Kate says. “Is it still incredibly dangerous for a survivor to leave a trafficking situation in the state of Indiana? Yes. Do we still have a lot of corruption in the process? Yes. But have I seen an unbelievable exponential amount of forward movement in the last three years? Also yes.”